Managing our disappointments is an invitation to take up a new challenge to move from the broken to make something new and perhaps more beautiful, like in the Japanese tradition of kintsukuroi (which I have written about before to another). It is a signifier that has been broken – trust, hope, confidence – was worthy of being kept whole yet that wholeness was no longer its truth.   Moving through the disappointment is transformational, a liberation. This is a letting go, and an enabling. What was held in the container, now broken, is released. What ever the container is, be it the heart or the head, that container has served as a charging station and now this new thought or emotion is released and while not fully formed, is applied, to make a new way.

Disappointment is in many people’s lives, the rug being pulled out from under one’s feet, is an everyday experience.

Hours of labour to be reduced to a single syllable response – no.

A generation of dreams to be washed away by the flick of a pen.

An agreed commitment is betrayed.

As disappointment wriggles its way out of the body, into the ether and into conversations it starts to transmute, empower and eventually transform. Disappointments inevitably are a call to action with redemption sewn into the seams.

I have been witness to many disappointments in people’s lives recently, and in some cases midwife to releasing those disappointments. There is the recognition that letting the disappointments linger is part of the grief, and then letting those same disappointments serve as the bedrock for a new way. As the awareness comes, it is like the gold of kintsukuroi making something more beautiful because it is broken.

Instead of By Appointment to some regal authority, how about we consider the idea of beautiful people being made By Disappointment?

Disappointment is just the initial meeting with the frontier of an evolving life, an invitation to reality, which we expected to be one particular way and turns out to be another, often something more difficult, more overwhelming and strangely, more rewarding.
David Whyte, 2003 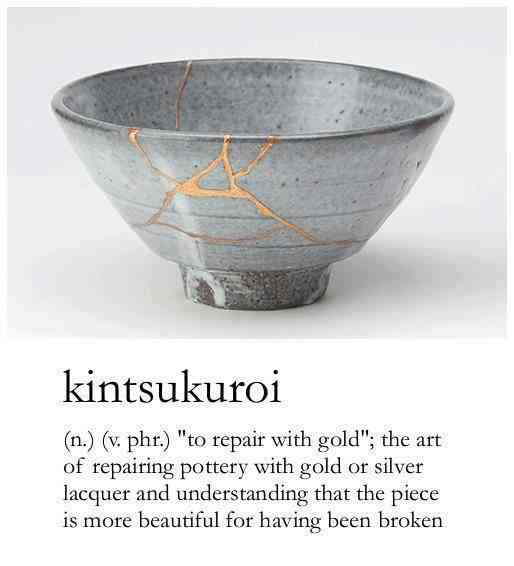 3 thoughts on “Made by Disappointment”