Conversations with yourself, the best version of yourself, the truest version of yourself, are the hardest conversations.  For around twenty-five years I have invoked Rilke’s instruction to live the questions, but not fully embraced the guide he also gave to go along with this instruction, to be patient with all that is unsolved in your heart.  And now I come to another threshold and am digging deep to discover what patience and love might feel reveal in living the questions to their fullest potential and in doing so live into the answer.

“Be patient toward all that is unsolved in your heart and try to love the questions themselves, like locked rooms and like books that are now written in a very foreign tongue. Do not now seek the answers, which cannot be given you because you would not be able to live them. And the point is, to live everything. Live the questions now. Perhaps you will then gradually, without noticing it, live along some distant day into the answer.”

Along the way, the questions take on a depth hidden in their earliest incarnations. The eternal question of Who are you? Started off life with an address, a location in a family order, infused by DNA, connected by legal, moral and dutiful threads; now comes into its mature form to wrestle me to the ground liberated from all other holds. Approaching this question with a mirror, no rose coloured glasses, denuded of memories enables raw vulnerability to arrive.

When you have nothing else to lose, gain is all that is possible.  The vastness that spelt emptiness and a vacuum, now offers itself as river deep, mountain high, possibilities. A filling up and overflowing in the way popcorn can’t be contained. The hard kernel of corn protecting it’s source of energy stored to be released when put under heat and pressure and then with puff turning inside out, propelled to fill the empty space. One pop after another, exploding not imploding, reminding me I too can be released in little and consistent bursts.

Accepting the invitation to release, is a complex process.

There are many possibilities for how we might come to be released.  A simple dismal has served me well in the past. Then there is the heavy load that we carry that requires another to forgive ourselves before redemption. For instance, in the movie The Mission, Mendoza a former slave trader and soldier is released from his past sins metaphorically captured with a sack full of the weapons of his past life being carried up through high and dangerous waterfalls, the load is eventually cut away from him, by the ones he had previously enslaved. Unfettered and forgiven, he is liberated. Our release is often dependent on others forgiveness and our ability to accept that possibility. Then there is the sophistication, simplicity and science of the popcorn which is serving me well as a metaphor at the junction of Act 3 facing into the world.

That little drop of water inside the corn that turns into steam and causes the corn to pop and turn into a shape about 40 -50 times its original size according to popcorn.org. As the starch forms and the gymnastic popcorn leaps up into the air, somersaults, forms a tower with its transformed peers.  This is the kind of metaphor that can sustain me, leveraging off the steam and heat and turning into something bigger, bolder and more amazing. Just how much popcorn is necessary is the kind of question to live while seeking answers to questions that have no right to go away. 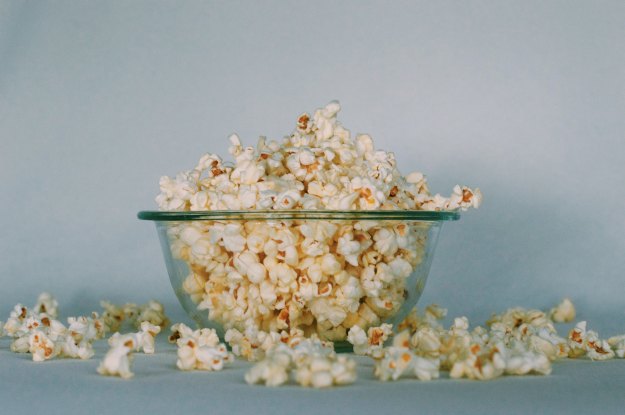 Photo by Georgia Vagim on Unsplash