We are faced with literally thousands of decisions a day – what to wear or eat, means of travel, what to listen to, what to pick up, what to put down. It is estimated, as adults we make about 35,000 decisions a day. We have learnt to make these decisions over our lifetime. The plurality of choices we make individually have an aggregated impact. The cartographers of the late 19th and early 20th century drew maps and coloured them to indicate who were the conquered and who were the conquerers. I remember Australia being pink to indicate a colony of the British Empire, surely an early indicator in my life of the knowledge of invasion. The way maps are drawn have found their way into the micro-decisions of our everyday of who and what is in and out. To collectively behave unconsciously of our history reinforces the past; to disrupt the narrative with truth telling, new data and mindfulness breaks open the potential for new neuronal pathways to be built. This leads to more disruption and it is more than the colour of a map that will help us with new decisions to made.

Once you start to live more mindfully, it is overwhelming and you can’t unsee or un-hear what was hidden or unspoken. You notice more of the decisions you are making that hold injustice in place. Planting indigenous ground covers in places where land was cleared by early settlers might be a simple gesture of restitution and healing; learning language to greet people an act of respect and aid to preservation; learning about white fragility and sharing your knowledge with your peers an act of conscientisation. As we build our mindfulness muscle we start to notice all the decisions we make and the potential we all have to help disrupt the status quo which perhaps really a collective amnesia.

Waking up isn’t easy. Changing decisions and habits of a lifetime requires retraining, support and stamina. Anyone who has had to break any kind of addiction, go on a diet, give up a favourite food will have this challenge to draw on. You will fall back into old ways, you will embarrass yourself, you will have to start over and over again. It is a discipline and a practice and if there are external signs and boundaries they might help or they might also get in the way. A friend who brings flowers instead of wine if you are dieting is the kind of friend you need if making changes around food. And one who brings chocolates knowing full well you are trying to make a change is not acting in solidarity.

Think about applying these same principles to bring changes around climate or structural racism and what do you notice? You might be start discovering insights and opportunities. I am trying to develop a practice around what I bring when invited to share a meal – more locally sourced produce and home made. It is a feeble attempt at focussing on low food miles and recognition of the place food comes from as a gift from one location to another. I see more and more people doing this, it is reviving the practice of our grandparents and all the generations before and seems so simple I feel a bit pathetic even mentioning it. Imagine though the collective consequence of this a gifting of abundance between friends and neighbourhoods that would literally change local economies.

An abundance of decisions can drown us and we look for short cuts to help us. Only having one colour of underwear may reduce 100s of decisions in a year! Building new decisions pathways may be an aid too and if we develop classification methods to help us (think red, orange green) we can move through our decision tree with more confidence and ease. Choices are deeply and inextricably entwined to our privilege. I get to make so many decisions because of my entitlements and coming to this knowing is what happens when you start to wake up. We are being shaken by activists who are screaming at us, showing us the way forward, trying to get our attention – if you feel a bit shaken, stirred, uncomfortable – chances are you are being woken up and new decisions are emerging.

Photo by Adolfo Félix on Unsplash

The space between the platform and the train has an attribution all of its own. The London Underground station address system reminds us with a regularity (that has the danger of becoming too familiar) to mind the gap.

Gap – a space where we can fall, be injured, disappear, tear apart.

Can I thoughtfully pay attention to a definitive identified space so that I won’t be seduced or captured by it? By definition if I do mind the gap, then, my mindfulness will lead me safely to my next destination.

Like many a pilgrim I haven’t always obeyed the instruction to mind the gap. I have sometime been seduced and fallen into the space, or danced dangerously close to the edge teetering on the immoveable platform playfully testing both the gap and the platform to see where I might fall.  I have also landed heavily in the gap while jumping off a train, scurrying to get a steady foothold so the gap would not claim me.

The gap holds its own secrets of darkness. The automated digital voice brings a comfort all of its own and when I hear it when I am London I often treat it like the bell for mediation calling us to stillness and back to mindfulness.

Thich Nhat Hanh first encouraged me to look for the signs in everyday life to bring me to mindfulness. One recording of his on driving in traffic is still a practice, and that is to treat the stop sign as an invitation to breathe and the sound of a bell on a train or a tram as the bell to call us back to mindfulness. So too is the message and the announcement to mind the gap.  Be mindful of falling into the abyss between being still and moving – alight the train to the next station in life with care and definition. Stand attentive to make the move and not be distracted by the gap in time and space that one might have to traverse to get to the station or back on the train.  Mind the gap could well be a mantra all of its own for the modern city pilgrim commuter!

The break in the continuity of the journey is what the gap announces – there will be a break in transmission is what happens when you are in the gap. The pause gives a moment of respite and has its own value and with it perhaps a practice.  A practice to honour the gap that we cross over from stillness to motion and back again – a continuous call and response of its own.

I reflect on the gaps I cross and the bridges I make when I step over gaps uniting in a single step two sides of a single journey. The generation gap is one that I find myself trying to bridge on a daily basis. The gap between the rich and poor, housed and homeless, fed and hungry, settled and seeking refuge – there are so many gaps that I feel called to be attentive too, even if I don’t have the capacity to bridge them, I hope I will be able to mind the gap and bring them to my attention.

I do want to mind the gap and to be mindful of the gaps I just jump over each day with ease; often with scant attention, just jumping on the next train, to the next station barely taking time to be still on the platform.

What if we had no gaps to mind ?   Hildegard I think the most ancient of baptismal rites provides some instruction here – in Christ there is no Jew or Gentile, slave or free, woman or man no more.  In this scenario there is a world of equality and unity, where there is no gap to mind because the void has been filled.  A reflection on that conundrum might be something for another time!

For now,  I  invoke the  mind the gap mantra and in doing so, reflect on the relationship between action and contemplation. 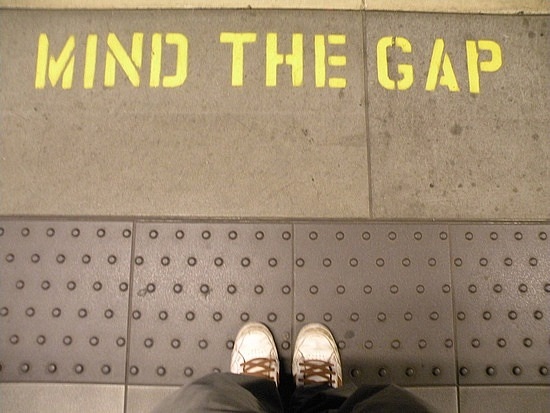