I have a bruised and bloodied ring finger on my right hand, after an accidental jamming in a car door. It is not a pretty sight, and the throbbing was relieved early by numbing ice.  Trauma in the body is a great reminder of the way trauma can turn up in the mind too.  A sudden impact can often lead to swelling of feelings and blood rushing to the head followed by numbness. Feeling self-pity is often not far behind. I am taking this injury as instruction and a reminder that accidents happen, and we all need someone with an ice pack once and a while to ameliorate pain and discomfort.

This week is Reconciliation Week and I have to say it is not something I have ever been able to get my head around completely. I do not know what Aboriginal people need to reconcile with non-Aboriginal people – I have always seen this as a week when whitefellas can use the prompt to make some amends, pay the rent or at the least do some learning about our past.  I have been on the road and in Central Australia, mainly in well known landscapes with only the barest of attention to First Nations. There were other signs though, the number of young ones in training and in jobs, more dual signage in language of places and flora, artists and art celebrated in public places and premium menus with bush tucker. When I come again, I hope all the leaders will be locals and the custodians of the stories, food and landscape will be so common that the temptation for the exotic over ordinary will have disappeared.  The outback is not like the cities and just like my injury the accidental encounter might jar and disturb but, in a few days, will be healed and not much would have changed. You need to stay longer to get the real impact and not just a temporary disruption, so I pack up my city thoughts and quick-to-judge views with my belongings.

The overall feeling, I have is of gratitude to Anangu for sharing the centre with us all. It is a radical generosity that is quite overwhelming.  Sharing the land and the sky is an incredible gift.  They have watched and endured generations of whitefellas climbing up Uluru and when I overheard people complaining about the cost of going into the park, I was genuinely shocked. I wanted to say – such a small amount of rent to pay – but my words would not come out. I have more work to do in my reconciliation practice.

Treating this time as a pilgrimage and meeting people along the way where they find themselves and find me has been a challenge. I am out of the practice, possibly a consequence of these COVID times. To live as a pilgrim celebrating life and taking practical steps towards transforming injustices and violence, has not been so easy for me recently. My failure to call out complaints about park fees just one of this penitent’s claims, and my swollen finger is hearing my confession, as I clip on this keyboard.  The absolution arising is: vulnerability is a consequence of risking yourself, and sometimes that is painful.

Blowing off steam, having a rant, debriefing … what ever you want to call it … sometimes you need to make space to let excess energy and anger, disappointment, fear, anxiety take shape and be expressed. I’ve noticed over the years these moments in the life of an individual activist can leave them depleted, and in the life of a movement can take people into dangerous even explosive situations. They are often the moments where self-destruction seems only a breath away. Finding ways to do this safely and constructively requires discipline. For an individual it requires having quality friends and places where this can be done out of harm’s way.  It is necessary, and with its intensity can bring new insights and invitations.

This week I have watched at a distance the horror of the death of black man killed by a police officer on the streets in the Minneapolis. The rising up of outrage all over the world is too little too late for the man killed. The canaries in the coalmine of racism and inequity are now writ large on the consciousness of a nation.  In my own country institutionalised colonialism results in the deaths of Aboriginal people every day and the the life expectancy gap between Indigenous males and Indigenous females is 4 years (compared with 3.2 years for Non-Indigenous males and females) The life expectancy gap between Indigenous males and non-Indigenous males is 8.6 years (compared with 7.8 years for females). And then there is the 1987 Royal Commission into Deaths in Custody with around 300 recommendations, most of which are yet to be implemented. How we mourn, act in solidarity, educate, mobilise and how we don’t, causes our pain to seep out and take expression.

Very rarely in Australia are the non-white community so moved by injustice that they take to the streets.  This year is the 20th anniversary of walking across the bridges as part of National Reconciliation Week and I wonder how we might bring more of these actions into the public psyche by embedding them into our national calendar.  National Reconciliation Week ends with Mabo Day (June 3) and Bonita Mabo first called for making Mabo Day a public holiday after the death of her husband Eddie who took the action to the High Court that extinguished the falsehood of colonisation that Australia was uninhabited and with no laws over land and sea. Making public something that is invisible to many is one of the powerful ways we discover what is going on. The video footage of a man being murdered becomes grounds for a charge of murder, yet the institution and cultural context that breeds and fosters the behaviour of the individual or small group may not be held accountable or changed.  In Australia, no police officer or correctional services person has been charged over a death in custody.  There have been 400 deaths since the end of the Royal Commission in 1991. We are not descending into civil war on the streets, however the war of occupation continues and manifests itself in the diabetes clinics, in the lack of access to health and education, telecommunications, food supply chains, number of arrests and incarcerations.

I have always struggled with the flag. Seeing the Australian flag with the Union Jack in the corner is a constant reminder to me of our colonial story. I am living in a neighbourhood now that seems to have an abundance of flag poles and flags appear from time to time. I have a small Aboriginal flag in my office, which I have had for decades and it sits behind me, and has usually been up high to remind me I live and work under the sovereignty of a nation that has not had a treaty, on land that has never been ceded.  It’s National Reconciliation Week and I have been trying to figure out a way to pay my respects in a more public way. I have signed up for A Sign of Respect and  my sign arrived and I will organise to get it onto the front of my house.  It arrived with some guidance and gratitude. It also had a disclaimer on it about the social enterprise not being responsible for any damage that might happen to property where the sign was put up.  That stopped me in my tracks. It was a window into the meaning of solidarity.  It’s a small sign of respect and I live in a small street in a small seaside community. 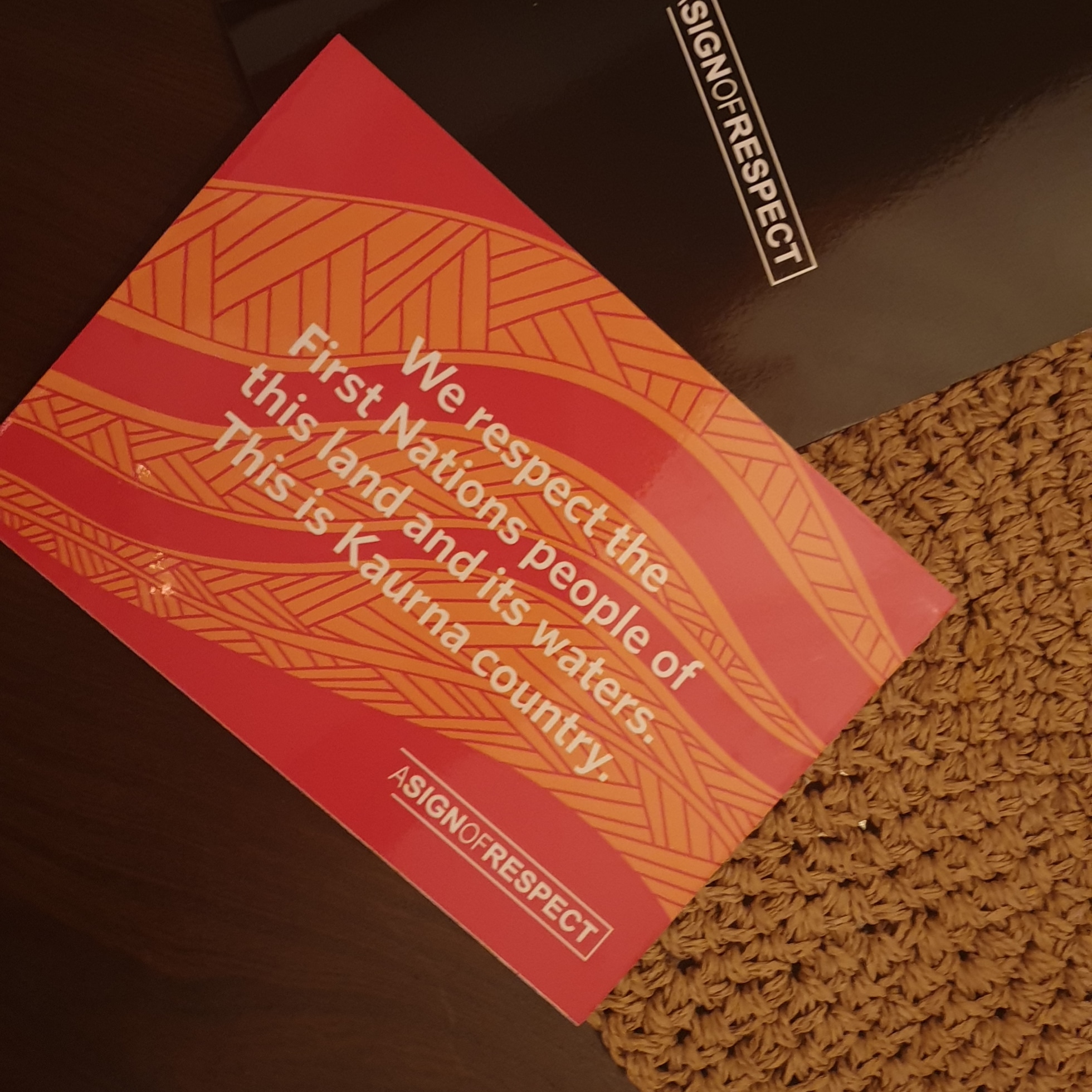 ps I also want to reprise and remember the Deliberative Poll we did in Canberra in 2001 which brought together almost 300 randomly selected Australians to consider reconciliation and black and white relations in Australia. It was an emotionally charged extraordinary process that took the team to remote, regional and urban places. It culminated in a two day event at Old Parliament House. You can see the 3 minute trailer here. It changed lives forever. I had the privilege of being the lead facilitator, supporting recruitment and training the team of volunteer facilitators for the two-day piece of the process. co-designing and supporting Dr Pam Ryan with the initiative. I am forever grateful for the opportunity.