Sojourner Truth is perhaps the most famous African-American woman of the 19th century. Fuelled by her religious conviction for justice as a child of God, for over forty years she traveled the country as a forceful and passionate advocate for women, slaves and the dispossessed. 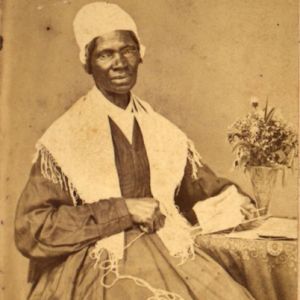 Temporary and transitional, passing through as a guest, the sojourner goes on their way. Speaking with poise and clarity about conditions and the real life experience of what it meant to be a woman, a slave, black Sojourner Truth, named herself and claimed a place in history as a woman of influence, persuasion and passion. Choosing her own name to describe what she was doing is such a powerful way to stay on message! The theological underpinning of her famous “Ain’t I a woman” speech is recorded as her saying “can’t read, but I can hear. I have heard the bible and have learned that Eve caused man to sin. Well, if woman upset the world, do give her a chance to set it right side up again.” Restorative justice – right there!

Sadly human rights, slavery and women’s rights are still on the agenda and what names do we have on the ledger trying to get these wrongs turned around? The movements of our time, are full of good and great women like Sojourner Truth, stepping up and stepping out into spaces to be heard. I immediately think of women who like Sojourner are naming themselves. How about Pussy Riot – what a perfect name for our time and for their message spread through punk, anarchist activism.

Finding our name and finding our voice does not need the genteel permission and good manners shown by Sojourner, politely asking the audience listening at the Women’s Convention in Akron, Ohio, on May 29, 1851. We can burst onto small screens with images, sound and voice, but having some clarity about who we are and what we want to say is certainly worth leaning on Sojourner’s example. Who you are, what you stand for and what you want to achieve by speaking out are certainly worth clarifying.

Sojourner is alleged to have cleared her throat, take off her bonnet and stand tall (like an Amazon it is reported). Again, great instruction to prepare to be heard – ask permission from the audience, walk forward, clear your throat, stand tall and start proclaiming. The biblical proportions of speech making are all there – the parting of the Red Sea (making your way to the front with people moving to the sides and you walk through); clearing your throat (John the Baptist, clearing the path for Jesus to walk); standing tall (in the temple before Jesus’ acts of proclamation to declare who he was) – the power of the lessons heard embodied taking shape in former slave – the instruction continues! There is no need to go looking for a better example of how an activist can lead in the public space and the lessons are still applicable. Asking for permission seems such an unreasonable and unlikely step these days, yet this simple act of requesting to be heard is everywhere from on line petitions to the making of appointments with a local member of parliament. It is a step that begins a conversation, an act of listening and being heard.

For the sojourner to speak truth to power is an act of nonviolence and a declaration of war on injustice. Prepare to be heard.  And taking the lead from Sojourner Truth, what is the name you might give yourself?